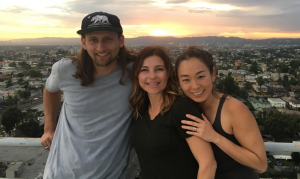 The Producers, comprised of Shari Rigby, Claire Yorita Lee, and Lukas Colombo have worked together since 2015, when they joined forces to produce the award-winning film, Birdie’s Song. Since then, they have collaborated on numerous projects, including a piece for FOX’s re-release of Passion of the Christ, entitled Pursue the Passion, and a 20-episode television series, Dream Center, for Daystar Network. They are first and foremost passionate about Jesus and devoted to telling great stories glorifying Him, each possessing a unique set of talents that together allow them to fulfill this calling.

Actress, writer, director, and inspirational speaker, Shari Rigby is outspoken and passionate about her faith and family.  Shari began her acting career as a lead in the Dove award winning music video, “Slow Fade,” by Casting Crowns. She also appeared in The Young and the Restless and The Bold and the Beautiful. Her feature films include Not Today which received seven awards including an IFFF Spirit Award and Best Justice Film; October Baby named one of the “Top 15 Impressive Box Office Performances of 2012” by CNN; and leading roles in Boonville Redemption (starring Diane Ladd, Ed Asner), Wildflower (starring Cody Longo and Nathalia Ramos), The Journalist (starring Sharman Joshi and Stephen Baldwin) and Extraordinary (starring Karen Abercrombie, Leland Klassen and Lindsley Register)

Shari co-wrote her biography, Beautifully Flawed, with Claire Yorita Lee, which was published in March 2015. Shari, Executive Producer and co-director of the show, Dream Center, airing on the Daystar channel.  She has directed and co-written several short films including — Birdie’s Song, nominated for 8 awards, The Church That Never Sleeps for Dream Center, and Pursue The Passion devotional for the rerelease of The Passion of The Christ.

Shari is the founder of “The Women In My World,”  a women’s group focusing on identity, purpose, ministry, serving others, mentoring, and living life in Hollywood.  Shari’s passion is serving others through the Dream Center.  Shari’s greatest gift of all is her family. Shari and her husband Matt have been married for twenty years and have been blessed to raise two boys together.

A former recipient of the ABC/Disney Writing Fellowship and the FOX Diversity Writers’ Initiative, Claire has worked on a number of TV shows and pilots, including ABC’s Thieves, FOX’s Skin, and NBC’s Medium, where she sold a story.  She wrote and produced a pilot, My Life Disoriented, funded by an ITVS grant, which premiered on PBS’ Independent Lens. She wrote and produced a short, Engaged, which had its television debut on Sky Angel 2; and she was runner-up for the CAPE New Writers’ Award for her comedy pilot entitled, South Coast Shuffle.  Claire recently wrote two episodes of Discovery Family’s Transformers: Rescue Bots and an episode of Disney’s Miles From Tomorrowland.

Claire co-wrote the short film Birdie’s Song, Lassies for the Salvation Army, and The Church That Never Sleeps for Dream Center with Shari Rigby. Beautifully Flawed, which they also co-wrote, was published in March of 2015. The pair recently completed the TV series, Dream Center for The Daystar Network, which Claire wrote and co-executive produced. They also co-wrote the online devotional for the re-release of FOX’s The Passion of the Christ, and filmed it’s promotion video, Pursue the Passion. Claire has a comedy feature, The Perfect 10th, currently being shopped, and is in development on a musical stage play, The Quarter Slot Sisterhood. Claire lives in LA with her husband and three children.

Lukas Colombo is a multi-award winning film director and cinematographer with a strong passion for his craft.  He studied Cinema and Television at Palm Beach Atlantic University where he was honored as the “Outstanding Graduate in Entertainment Media.” That same year, he founded Moai Films, a production company that has produced numerous projects from commercials and music videos to narrative films and documentaries. He has received over a dozen international and national awards for his narrative work, and his music videos have been viewed millions of times online via MTV, VEVO and VH1.  His full-length feature film debut recently premiered at LA Live Regal Cinema’s Premiere House in Los Angeles, California and he just wrapped on 20 episodes for the Dream Center TV series.  In the last 2 years he has also traveled internationally as a guest speaker and brand ambassador for Blackmagic Design.

Lukas is currently in pre-production on a slew of projects and resides in the Greater Los Angeles Area with his loving wife and three children.  Raised in Santiago, Chile, Lukas is a widely traveled individual, fluent in both the Spanish and English languages and fervently committed to excellence, innovation, and integrity.